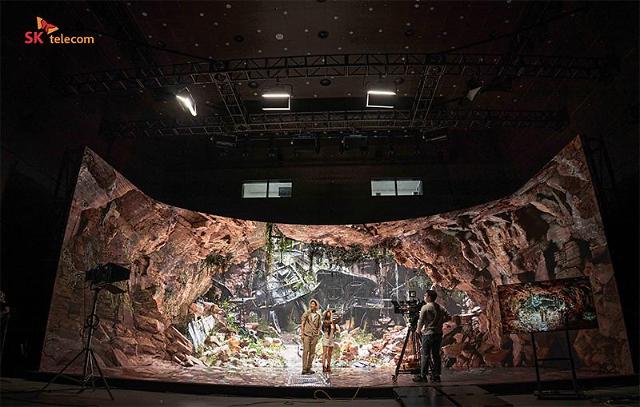 SEOUL — SK Telecom, one of South Korea’s leading mobile operators, has opened a visual effects (VFX) studio to boost its content production capacity and expand partnerships with global media companies. The studio has two LED wall stages that can create realistic graphics to remove the need for outdoor shooting.

VFX is the process by which imagery is created or manipulated outside the context of live action shooting in film and video production. The integration of live action footage and computer CG elements to create realistic images is called VFX.

“Through the application of our fixed and mobile telecommunications, artificial intelligence and cloud technologies, we expect TEAM Studio to contribute to the growth of the media content industry,” said Kim Hyuk, head of SKT’s global media support desk, in a June 21 statement.

Leveraging its state-of-the-art fixed and mobile network infrastructure, SKT aims to create a global content ecosystem by promoting collaboration between TEAM and other global studios.

With the spread of virtual content and rising customer expectations, the role of VFX-based virtual studios is becoming more important, SKT said, adding that virtual production using LED walls is growing rapidly in the global media industry, being increasingly used in Hollywood films.

Connectivity that enables the sharing of resources and capabilities between content production studios will become key to success in the future global media market, SKT said. Two studios located far apart can access the cloud to display the same background on their LED walls and film actors in each studio in real time to create scenes that look like they are acting together at the same location.

SKT said it would form a consortium with leading studios specializing in LED walls and deliver a new paradigm in content production through the sharing of infrastructure and resources between participating studios.


© Aju Business Daily & www.ajunews.com Copyright: Nothing on this site may be reproduced, distributed, transmitted, displayed, published or broadcast without the permission of Aju News Corporation.